Baking Powder or Baking Soda? What is the Difference? 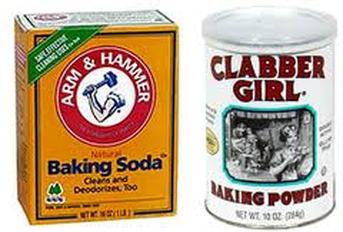 Answer: Both baking soda and baking powder are leavening agents, which means they are added to baked goods before cooking to produce carbon dioxide and cause them to 'rise'. Baking powder contains baking soda, but the two substances are used under different conditions.


Baking Soda
Baking soda is pure sodium bicarbonate. When baking soda is combined with moisture and an acidic ingredient (e.g., yogurt, chocolate, buttermilk, honey), the resulting chemical reaction produces bubbles of carbon dioxide that expand under oven temperatures, causing baked goods to rise. The reaction begins immediately upon mixing the ingredients, so you need to bake recipes which call for baking soda immediately, or else they will fall flat!